Happy gas is nitrous oxide, which is used to relieve pain through inhalation. 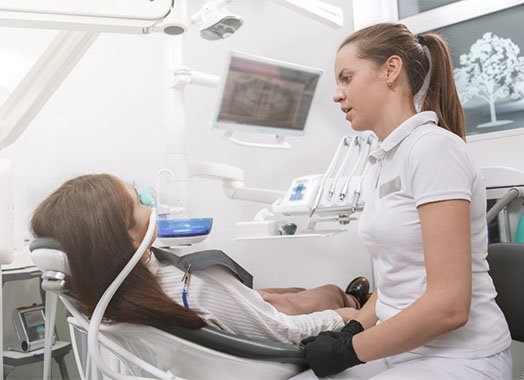 Nitrous oxide is a colourless and odourless substance that’s also known as “laughing gas.” When breathed in, the gas slows down the body’s reaction time. This produces a calm, euphoric feeling.

Nitrous oxide can be used before dental procedures to promote relaxation and reduce anxiety.

Nitrous oxide gas works fast as a sedative, but it doesn’t take long for the effects to wear off.

There are 3 effects in the working mechanism of happy gas.

After roughly 4-5 breaths, the pain will start to ease, and you will start to feel relaxed. It has no colour, smell, and doesn’t irritate. At a deeper level of sedation again, sleepiness, difficulty to keep one’s eyes open can occur.

The depth of sedation can be altered from moment to moment, allowing the person who administers the gas to increase or decrease the depth of sedation. Other sedation techniques don’t allow for this. For example, with IV sedation, it’s easy to deepen the level of sedation, but difficult to lessen it. Whereas with gas, the effects are almost instant.

Other sedation techniques have a fixed duration of action (because the effects of pills or intravenous drugs last for a specific time span); whereas gas can be given for the exact time span, it’s needed.

Happy gas is a safe, common sedation method, but it isn’t the right choice for everyone.

Consult with your Melbourne CBD dentist before a procedure and share your medical history with us.

Based on your current health status, your dentist can determine whether you’re a candidate for this method of sedation.

Your Melbourne CBD dentist at Art De Dente will work closely with you to find the perfect sedative option for you.

We are located at Level 17, 190 Queen Street in Melbourne CBD.

Why do dentists use happy gas?

Happy gas is a safe and pain-free sedation method which enables dentists to work more effectively, especially when dealing with children.

If you or your child suffer from dental anxiety or have previously had a bad dental experience, happy gas enables them to relax.

What should I expect to feel while on nitrous oxide sedation?

When inhaled, you may feel light-headed or a tingling in your arms and legs.

Some patients say their arms and legs feel slightly heavy.

Nevertheless, you should feel calm and relaxed. The effects of happy gas wear off soon after the mask is removed.

Can I drive home after my dentist appointment?

The short answer is Yes. Nitrous oxide sedation is felt within minutes, and the effects wear off within minutes after the gas is stopped.